Food distribution at West Berlin church was a great success

This was reported by volunteers at a food distribution on June 4 at the United Methodist Church of West Berlin.

The church’s first food distribution project was made possible through a collaboration between Heaven Sent Ministries and the Eastern Michigan Food Bank in Flint. Pastor Chris Titus and his wife Gina were thrilled to be able to host the first ever food giveaway in church history.

They thanked dozens of volunteers, including the participation of Armada Methodist Church and a Christian youth group. 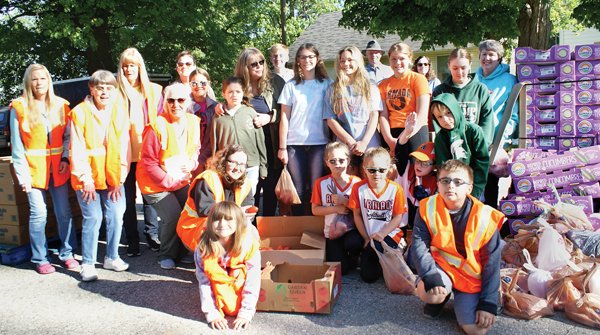 Volunteers of all ages took part in a food raffle on June 4 at the West Berlin United Methodist Church in Allenton. Organizers Pastor Chris and Gina Titus are planning another one on Saturday, July 9th.

“More than 84 vehicles participated in this event, and each of them received enough food for three families,” the Tituses said. “Some of them have combined cars to save on gas.

“With each family averaging about three people, we were able to serve about 747 people,” Pastor Chris said. “Given the abundance of food, other parties also received food aid, including neighbors, recluses in a local nursing home and a men’s shelter.”

Chris noted that most of the volunteers who unloaded trucks, packed and distributed food were from the West Berlin Methodist Church.

In addition to food, prayers were offered to those in need for a solution to their various problems, including illness, job loss, economic problems, and general frustration with the cost of goods and gasoline.

“The church wanted to find a way to help the community that was both practical and responsive to specific needs,” Gina said. “The turnout of volunteers speaks volumes about the commitment of our church members to helping others in the Almont, Imlay City, and Lapeer County areas.

“What was especially encouraging was the number of small children who came to help distribute food,” she continued. “There were a lot of smiles from both the volunteers and those who collected the food.”

Chris and Gina referred to some of the comments they heard from those who received the food.

“A woman named Barb said, ‘I can’t describe in words the food shortage relief work of this church.’ she said. “I’m so grateful.”

Another woman, Mary, commented that “things like this are so necessary. It’s great that the church wanted to help the community because so many of us really need it.”

Gina said that a gentleman named Dan expressed his gratitude to the church for showing kindness and generosity.

“It’s so discouraging to go to the grocery store knowing you can’t get much for your money,” Dan said. “The Church gave us food, and I really appreciate it.”

Given the level of need, the Tituses and other members of the church are planning another day of food distribution on Saturday, July 9, starting at 9 am.

Those wishing to pick up food on July 9 are asked to approach the church from the south on Holmes Road. to clear congestion at the intersection of Almont and Holmes streets.